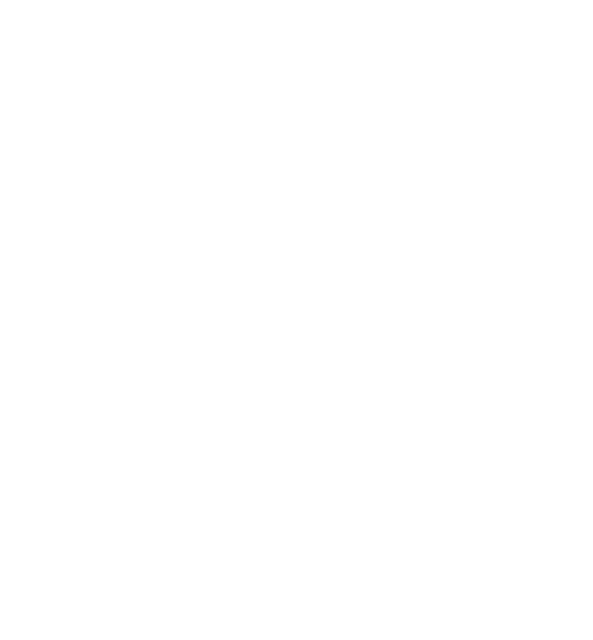 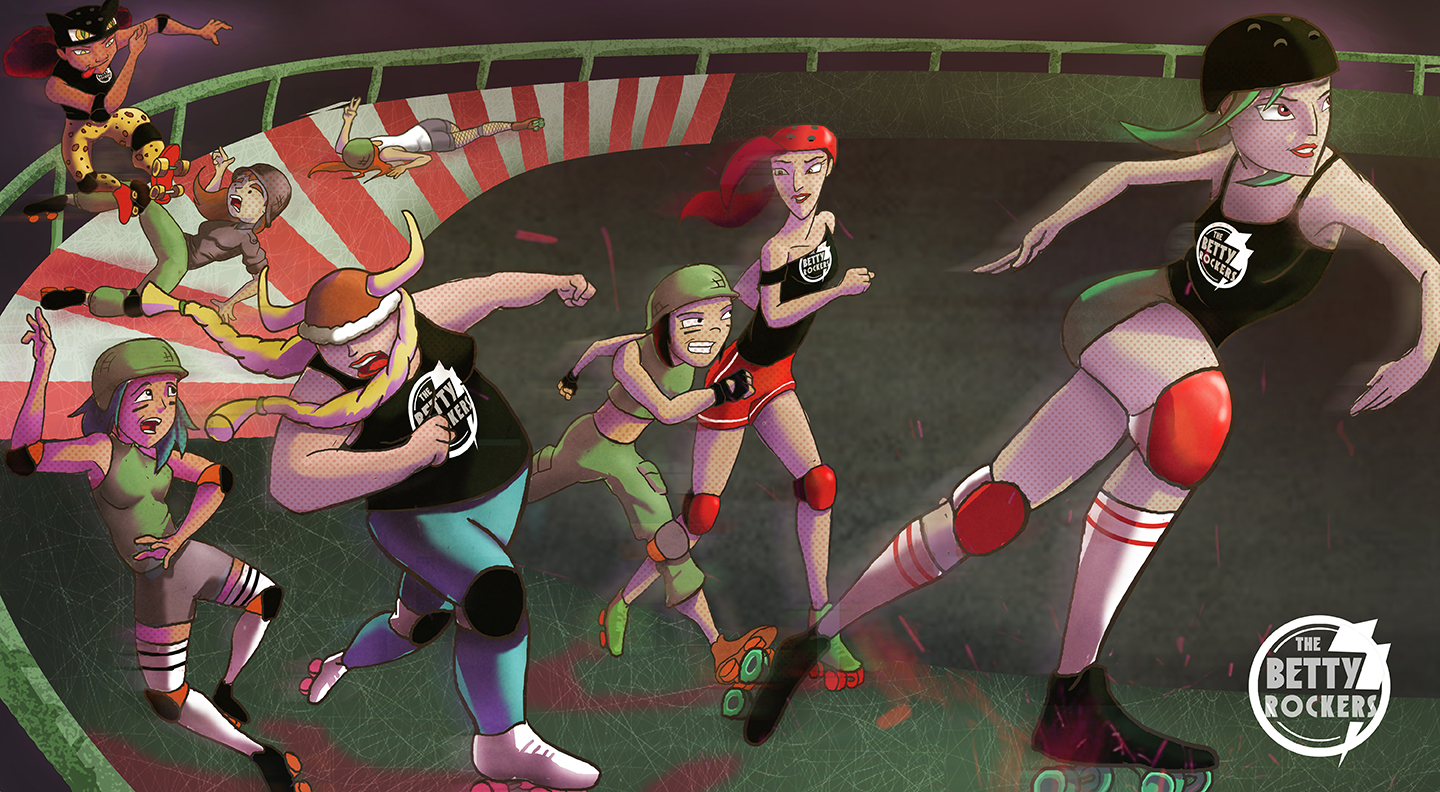 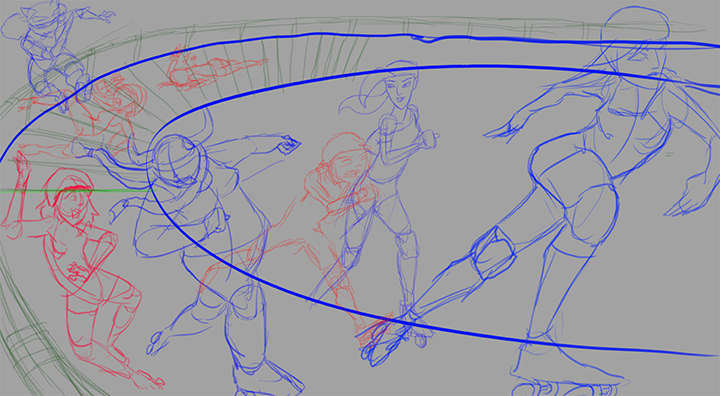 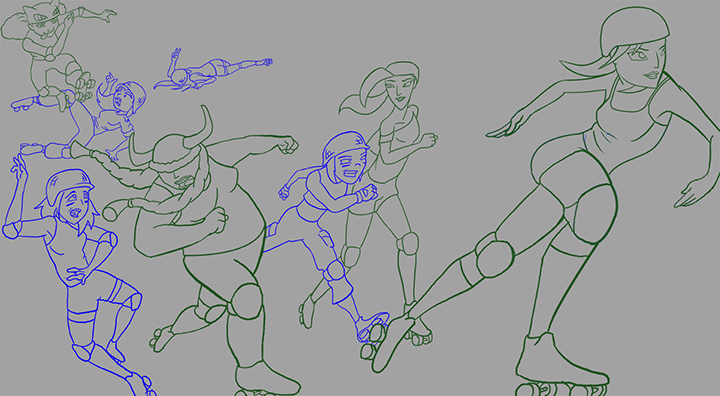 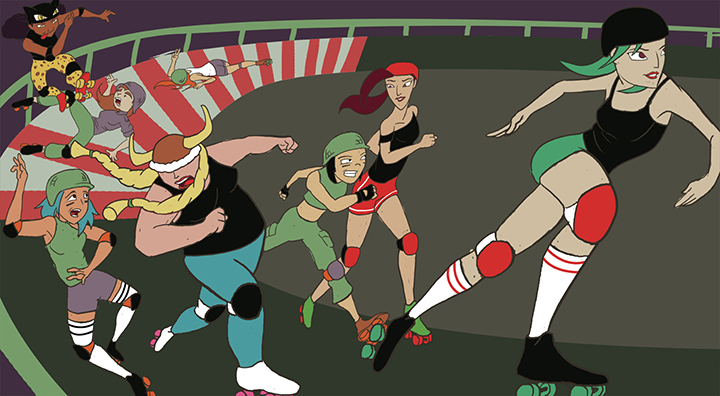 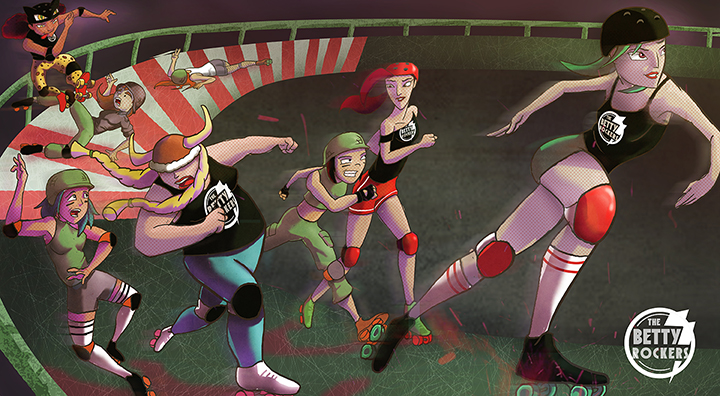 This is the story of five girls going through highschool and growing through the sport of roller derby.

“The show will be full of action with exotic teams that they compete against. However, there is also a strong emphasis on development….

The characters will encounter other sports teams outside of roller derby and learn lessons that help them out in the ring and in life from these other athletes. “

“Looks at the tall girl standing awkwardly. We all know a friend who has felt out of place soaring over a room. This makes her character dress more put together.

She is fashion forward while never wanting to stand out more than she has to. She has the most coordinated outfits out of the entire group. “ 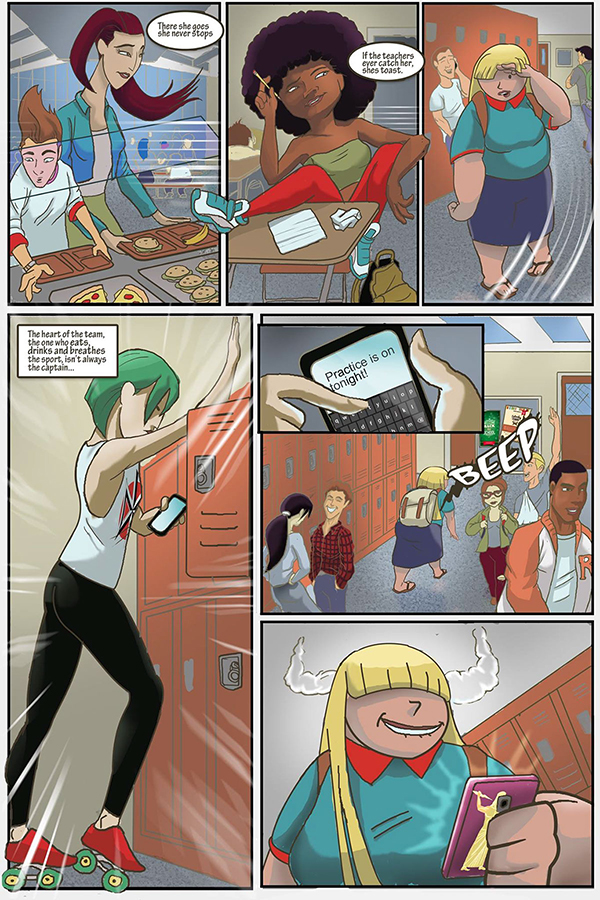 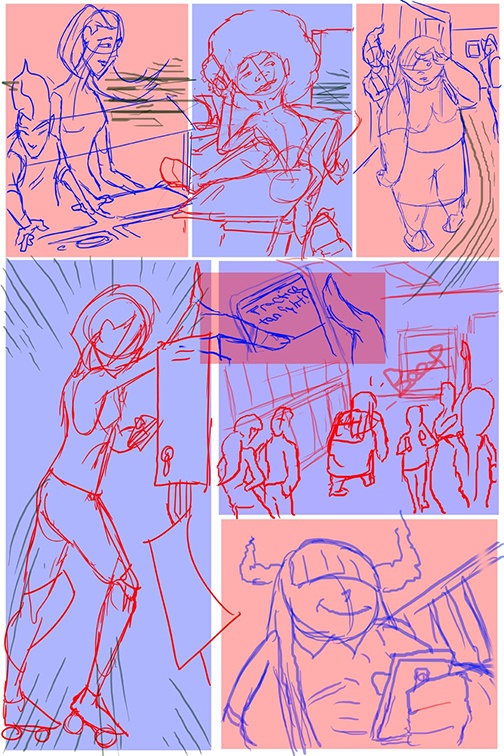 Wide Shot with slight zoom out

Girls are walking out of the Minior League baseball game, Everyone is laughing and joking.

Cut to close up of Lilth

Lilith is lagging behind deep in thought, she is still bothered about causing the team to lose in their previous match.

Wide shot with Lilth framing the left side of the screen

Betty is getting in the car with everyone else already piled in, she turns back to Liith

Betty: Hey Are you coming?

Lilith: No I need to stop somewhere before I head home

As the car pulls away Lilth waves euphuistically as if everything is okay, but she turns and we see her frustration over take her.

Lilth Thinks to herself:

How can the rest of them be so okay with loosing, especially when it was my fault? They are all fine, why am I so upset? If only I had managed to block that runner

Close up of Lilths foot as a baseball rolls and hits it, in the distance we can see a guy putting a bag of bats in the back of his truck

Down angel shot of lilth picking up the baseball

Lilth: Hey you dropped this!

Close up shot of the man’s hand catching the ball

Close up shot of Lilith’s face in utter surprise at what this guy just did, she then recognizes who this might be.

Medium Close up of the Henry rummaging through his bag Lilith enters the scene with a knowing look,  Henry still does not turn around to look at her

Lilth: Hey you’re Henry HT Bottom? I was just at your game, you were amazing

Medium shot of Lilth now taking her own resentment out on Henry, crosses her arms and says snidely

Lilth: To bad you didn’t hit a home run, but I guess that never happens…

Henry: Yea, I’ve never had one, that’s probally what’s kept me out of the pro’s all these years.

Wide Shot of Henry standing alone at night on home plate with a bat in his hand, a pitching machine mechanically sends balls his way. The outfield is dotted with baseballs.

Henry: I spent countless evenings after games hitting balls trying to figure out what was wrong with me, why I couldn’t hit a hommer. But, one night something clicked.

Montage shots of Henry catching many balls in the outfield a variety of poses, ends with him running and catching one without even looking, he turns back over his shoulder and smiles.

Henry: All those balls I kept hitting to the outfield, I kept seeing myself out there catching them and how I would do it no matter where it would go. I realized hitting a home run, meant I didn’t have any work to do. I realized I actually hate home runs! I don’t even have a chance at a great play.

Close up of Henry’s eyes looking as if they are in a trance, pan out to him transforming out of his batter’s helmet into what he is wearing in the parking lot.

So all that practice trying to be a home run slammer, really just showed me where and when I need to be no matter what is hit my way, now I am unstoppable in the outfield

Wide shot of Henry looking over at Lilth from the back of his truck with a humble but confident smile on his face, Lilth’s jaw is open because this is exactly the story she needed to hear.

Lilth: Ya know, That was exactly what I needed to hear tonight. I’ve been trying to block when I need to just focus on my speed, my game.

Lilth: Thanks for the chat man, keep doing your thing!

Shot of lilth walking away towards the camera, looking straight ahead the reaches across herself and catches the ball Henry threw, she smirks a knowing smile 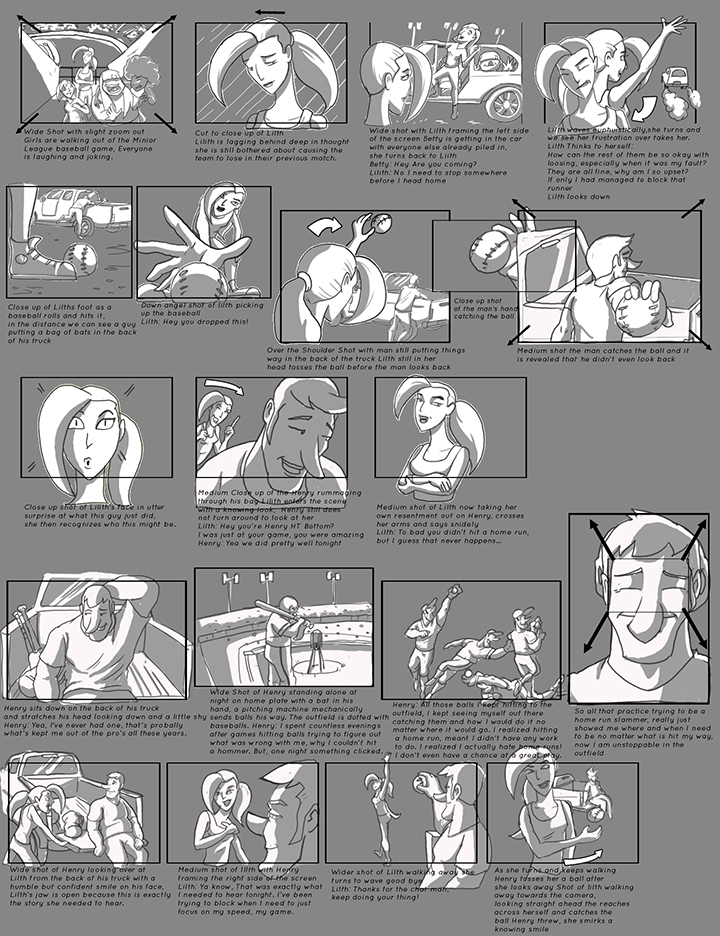